Festival Mixtur, in collaboration with Fabra i Coats – Fàbrica de Creació, opens the application for the Workshop in Conducting Mixtur 2016 as part of the Festival Mixtur 2016, which will take place in Barcelona from April 21st to the 1st of May. The workshop will be directed by the conductor Rut Schereiner.The deadline for applying for the workshop is the 7th of December 2015.

The workshop will take place on April 21st and 22nd including the following activities: 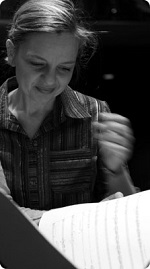 She is currently in charge of the orchestra conducting class in the Regional Conservatoire of Reims, and part of her job involves the conducting of the symphony orchestra. At present, she serves as artistic director of the Inextempo Orchestra, an orchestra composed of students from the University of Reims (Champagne Ardennes), the musical direction of which is led by students attending her conducting courses. She is also the artistic director of “l’ensemble diagonal”: a flexible group devoted to contemporary works.

Registration includes free access to all Festival Mixtur 2016 activities and concerts, for both active students and listeners, including the master classes of the Workshop on Composition and Sound Experimentation.

The organization will contact the selected participants during January 2016, asking them to confirm their registration by paying the fee and sending to convocatories@mixturbcn.com the certification of the money transfer. Failure to respond within the prescribed time limit will cause shifting the selection to the next participant of the waiting list.