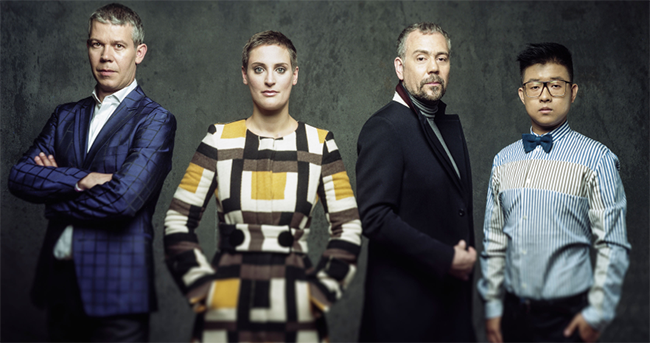 for string quartet and electronics

Quatuor Diotima is a French string quartet that specializes in contemporary music. Formed by graduates of the Paris Conservatoire and the Lyon Conservatoire, the group named itself after a composition by Luigi Nono, Fragmente - Stille, an Diotima. The Diotima Quartet has performed widely on the international scene and at all of the major European festivals and concert series (such as at the Berlin Philharmonie; Berlin Konzerthaus; Reina Sofia, Madrid; Cité de la musique Paris; London’s Wigmore Hall and SouthBank Centre; the Vienna Konzerthaus, and so on). As well as touring regularly across the United States of America, Asia and South America, they are also artist-in-residence at Paris’s Théâtre des Bouffes du Nord from 2012 to 2016.

Quatuor Diotima has worked with such major composers as Pierre Boulez, Helmut Lachenmann, and Brian Ferneyhough, and commissioned new works from Gérard Pesson, Alberto Posadas, Oscar Bianchi, James Dillon, and Miroslav Srnka. While being staunchly dedicated towards contemporary classical music, the quartet is not limited exclusively to this repertoire. In programming major classical works alongside today’s new music, their concerts offer a fresh look at works by the great composers, in particular Bartók, Debus­sy and Ravel, the late quartets of Schubert and Beethoven, composers from the Viennese School, and also Janácek. Quatuor Diotima has recorded for NEOS, Kairos, Alpha Productions, ECM, and Naïve.