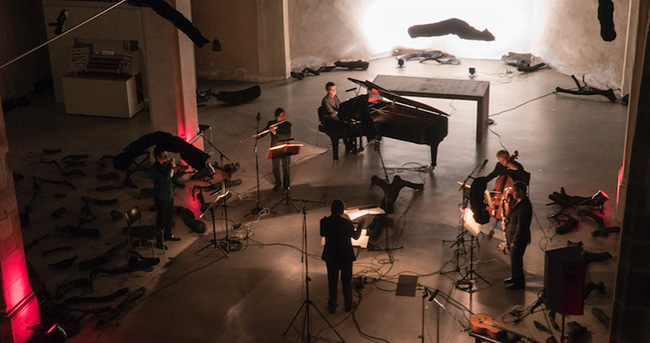 for clarinet, violin, cello and piano

Kommas Ensemble is an international collective of young performers and composers founded in 2015 in Cologne, Germany. Its members, who come from Italy, EEUU, Spain, Germany and Chile, have completed their musical education at important musical centres of the contemporary music such as the Universities of Music of Cologne, Düsseldorf, Bremen and the IEMA in Frankfurt. Kommas Ensemble arises from the need of linking the avant-garde music with its past, in a way which attempts to generate in its artistic proposals a space where the different aspects of the contemporary music are put in dialogue with the musical tradition. That every kind of music refers, in some way, to another, is the motto which has driven this Ensemble to develop its varied projects. Until now, Kommas Ensemble has given concerts and taken part in festivals in Cologne, Essen, Bremen, Leipzig, Bielefeld, Stuttgart and Frankfurt among others. The Ensemble has the support of important composers of the current scene, such as Younghi Pagh-Paan, Klaus Huber and Johannes Schöllhorn. The engagement in the next edition of the Festival Mixtur 2017 of Barcelona along with upcoming projects in Latin America as well as in Europe open and consolidate the presence of Kommas Ensemble in the international scene.