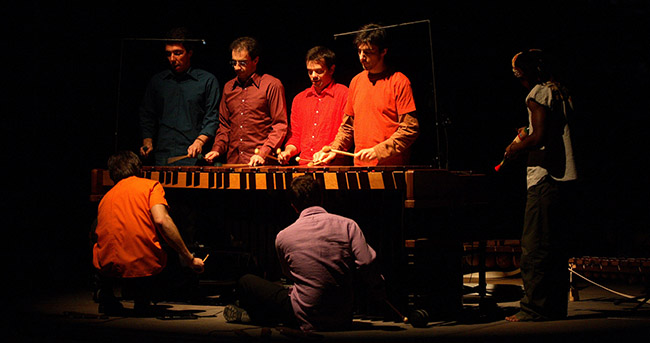 for marimbas and electronics

for marimba quartet and electronics

M- Piece composed within the Composition and Sound Experimenting Workshop 2017

Geared towards contemporary music and with open doors to all the worlds of sound, Drumming – Grupo de Percussão (Drumming – Percussion Group, DGP) stands, internationally, as one of the most important collectives of its kind. Founded and directed by Miquel Bernat, the group was instituted in 1999, by virtue of the experienced need to perform live and to show the training work being developed at the EPME and in ESMAE (Degree in Percussion in Portugal). Drumming (inspired by the piece with the same name composed by Steve Reich) synthesizes the evolution of percussion in Europe and, by divulging some reference pieces of contemporary music, contributes to the never-ending creation of new programs and to the constant challenge to musical innovation. The group is progressively conquering a wider public, to whom it presents a variety of shows supported by their aesthetic coherence and poetic unity and in which musical and scenic elements are brought together. The singularity of DGP’s role in the Portuguese music scene is revealed by the work it produces and the variety in the repertoire it presents.