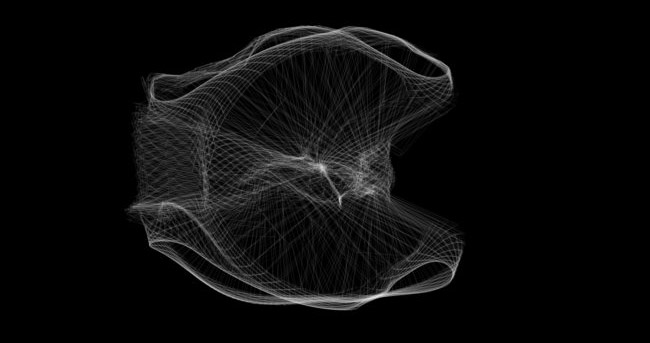 The chdh collective studies the images / sound relationships by creating audio and visual algorithmic synthesizers. Using equations describing natural mechanisms, they generate abstract choreography of particles whose minimalist material reveals underlying structures of great complexity, shaped by strange organic attractors. In search of a synaesthetic radicalism, their hypnotic performances work on joint movement between image and sound and belong to experimental cinema in the form used as much as to improvised music in the way they are played.
Since the early 2000s, they showed their projects in a hundred venues internationally, especially the Egregore performance (2011), which explores the group movements of a crowd of particles and Morphist (2015), a study of the transitions forms of an abstract substance.
This work also led to two editions: DVD Vivarium (Art Kill Art / Arcadi - 2008) that contains abstract video works as well as software developed for their creation, proposing to "replay" or edit them, and the USB stick Egregore - source (Art Kill Art - 2014), adaptation of the software used for Egregore, which resulted in a remote performance over 120 computers in twenty countries. Advocate of free software, they freely distribute their projects and the developed tools for their work, in particular the pmpd physical modeling library for Pure Data.