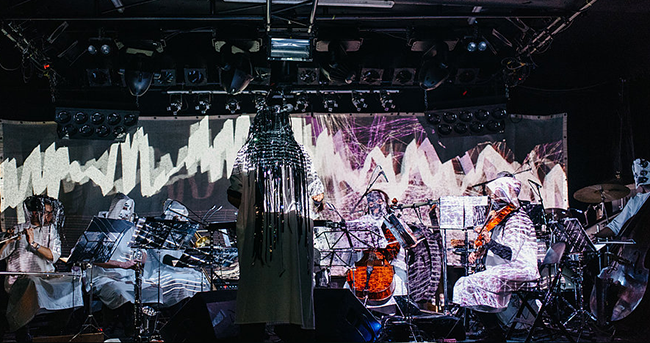 for ensemble and sensor-augmented conductor

for saxophone, percussion, piano and electronics

for ensemble and electronics

for ensemble and electronics

BLACK PAGE ORCHESTRA, founded 2014 in Vienna, is an ensemble for radical and uncompromising music of current times. The name derives from Frank Zappa’s composition the black page, a piece which score is due to the high density of notes and musical events nearly a black paper. Beside this clear aesthetical approach the ensemble focuses on compositions using electronics, video and different technologies in an artistic context as well as pieces with performative character.

Since 2014 the ensemble played concerts and projects in various sizes, from quintet line-up (flute, e-guitar, percussion, piano/keyboards, electronics) to line-ups including up to 14 musicians, always with a program following its clear and distinctive idea of contemporary music. The concerts took place at major contemporary music festivals in Austria and abroad, such as Wien Modern, Klangspuren Schwaz, SPOR Festival Denmark, Atlatszo Hang Budapest, but also in very different surroundings such as the Unsafe+Sounds Festival, a major Viennese festival for experimental electronic music, Izlog Suvremenog Svuka Zagreb, or the ZOOM! Festival, a festival hosted by the Jazzwerkstatt Wien. This is another central aspect of the ensemble's idea and crucial goal, to perform contemporary music outside the usual frames and institutions.