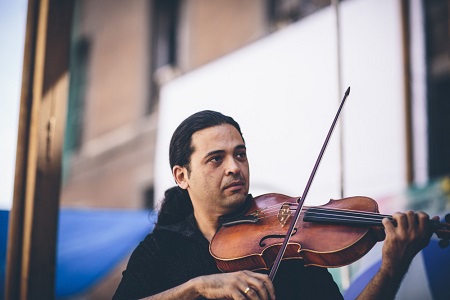 Winner of several international competitions, Yuval Gotlibovich stands out as one of the most requested violists of his generation. He has won the First Prize in the VIII International Lionel Tertis Competition, in the Aviv competition in 2004 in Israel and in the National Chamber Music Contest Fischoff, in Indiana (USA). His concert activity takes place in Europe, the United States of America, Canada and Israel. As a soloist, he has played with the Jerusalem Symphony  Orchestra, the Aviv Soloists Ensemble, the Ostrobothnia Chamber Orchestra and the Texas Festival Orchestra, among other groups. He has collaborated playing chamber music with important artists such as Menahem Pressler, Marc-André Hamelin, George Pludmahcer, Nobuko Imai and Janos Starker, among others.
Since September 2009 he teaches at the Reina Sofia School of Music in Madrid as Assistant Professor of the Titular Professor Diemut Poppen in the BBVA  Foundation Chair of Viola and as a Senior Lecturer at the Conservatorio della Svizzera Italiana, in Lugano. He is currently Professor of Viola at the Superior Conservatory of Liceu in Barcelona. Hi Debut recording for NAXOS featuring the viola music of Ramon Paus, has received worldwide recognition and was ranked 6th in worldwide sales chart of NAXOS for December 2016.
This last November, Sonata for viola and left hand Piano composed by Gotlibovich was premiered in the recital hall of Tokyo´s Opera House
by Nobuko Imai and Izumi Tateno. Gotlibovich will play a concert tour in Japan this coming may with Mr. Tateno with his viola sonata.
Gotlibovich played frequently with Ensemble Modern, Meitar, Ictus, Calisto and other major contemporary ensembles and worked with composers such as Deutilleux, Penderecki, Gubaidulina among others.