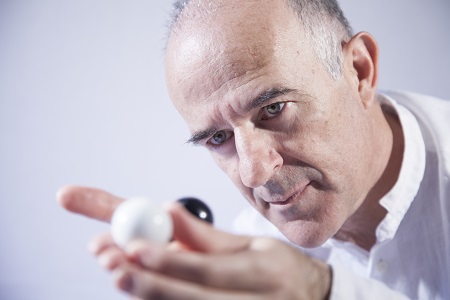 He has been fortunate enough to have studied with some excellent piano teachers: Margarita Sitjes in Alicante, Alexander Hrisanide at the Sweelinck Conservatorium Amsterdam, Ana Guijarro at the Sevilla Conservatory and Josep Colom at the Alcalá de Henares University.

Over the years, he has played at many important concert venues such as the Lérida Auditorium, the Zaragoza Auditorium, the March Foundation in Madrid, the Palau de la Música and the Auditorium in Barcelona, the Carré Saint-Vincent in Orleans, the CNSM in Paris, the Palau de la Música in Valencia, the Manoel Theatre in Malta or the Benaroya Hall in Seattle. Apart from performing in these great halls, he has also played at many of the music world's most prestigious festivals, such as the International Festival in Ibiza, the "Quincena Musical" in San Sebastián, the Forfest Festival in the Czech Republic, the International Contemporary Music Festival in Alicante and the Ensems Festival in Valencia, and with the Barcelona Sinfonietta, the l'Empordá Chamber Orchestra, the Symphony Orchestra Ciutat d'Eix, the Grup Instrumental de Valencia and the Orleans Symphony Orchestra.