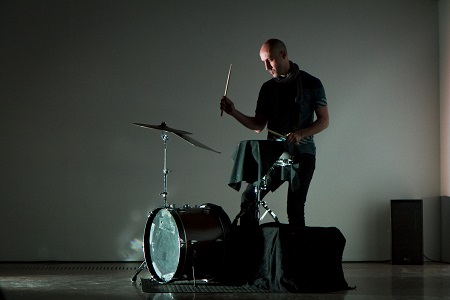 Composition/improvisation for dance and drums

Luis Tabuenca’s compositions explore the borderlines between composition and improvisation. His music has been performed in Canadá, USA, Colombia, France, England, Bulgaria, Egypt and Spain.

As an educator, Tabuenca is regularly invited to give lectures and workshops at universities and cultural institutions. He has been Artist in Residence at the New York University (USA), Canterbury University (UK), Seia Music Conservatory (Portugal), and the Sauzal Arts Center (Spain). Luis has recorded for Mode Records, Aural Terrains, Sinkro Records, Verso, Acheulian Handaxe, and Naucleshg. He has been honored in several percussion competitions and he has received awards by the Government of Aragon, the Ministry of Culture of Spain, and the Fulbright Commission. Luis Tabuenca is founder and Artistic director of the Experimental Music Festival (FAT).

Manuel Rodriguez dancer, choreographer and visual artist, his work focuses on the power of the image and abstraction, using the scene as a field of conflict between different artistic languages in order to transcend the perception and shape, where the body is articulated as vehicular and plastic tool.

In 2010 he creates his first solo entitled "Limits" with which participates in different festivals and with that obtained several prizes in international competitions such as ACT International Festival (Bilbao), Choreography Contest Burgos / New York and Madrid Unidanza Contest. Also in that same year he received 2º Prize Choreographic Contest of Madrid by the duo "Escuálido Marsupial" created with Elias Aguirre. In 2012 created the piece entitled "Loser Kings" and its short version "Fifht Corner" co-directed with Guido Sarli (Umma Umma Dance), with getting 1º Prize in International Choreography Contest "Burgos / NYC", 1º prize in the Choreographic Contest of Madrid , the 2º Prize at the Copenhagen International Choreography Competition, Award Tanzcompanie production of Graz Opera in International Choreography Competition No Ballet 2013 and an honorable mention at the 17th Choreographic Contest MASDANZA. In 2014 he premiered his solo "Screensaver" in the Salmon Festival European Talents Upstream  at Mercat de les Flors Theatre Barcelona, nd in its short version, won the 1º Prize in Gdansk International Dance Contest 2014 in Poland. In 2015 he makes a piece for Tanzcompanie of Graz Opera in Austria co-directed with Guido Sarli. Recently he nominated for the Critics Awards in the category of Best Dancer for the piece "Voronia" (La Veronal Company). In 2016 he created R.E.M a piece for 7 performers, nominated in the "Butaca Awards 2016" from Cataluña.