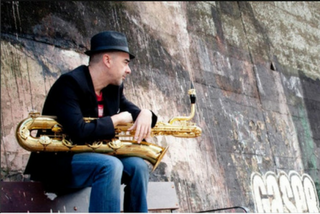 Joan Martí-Frasquier considers himself a dynamic musician, most involved in today’s music and always opened to new artistic experiences. He chose the baritone saxophone because of its large sonority, timber richness and extreme flexibility which make this instrument able to play all styles of music with a such special personality.

He has premiered more than thirty works by several composers from all over the world as Joan Bagés, José Luis Campana, Sergio Fidemraizer, Timothy Harenda and Albena Petrovic. His varied music projects include new music mainly but also make room to Early music and free improvisation, in addition to electronics and visual arts. He has performed in different festivals from Europe, America and Australasia as the New York City Electroacoustic Music Festival (USA, 2017), Tallinn Music Week (Estonia, 2015), Rc4 (Brazil, 2015), Classical:NEXT (Austria, 2014) or Mixtur Barcelona (Spain, 2013).

He has collaborated with the Association Bar&Co (France) and The Baritone Institute (The Netherlands), with an intense activity of promotion of this instrument. He did masterclasses and workshops at EurSax festival (Portugal, 2017), saxophone summer schools in Taranaki (New Zealand, 2017) and Sydney (Australia, 2017) and conservatoires of Amsterdam (The Netherlands, 2016) and Zaragoza (Spain, 2013).