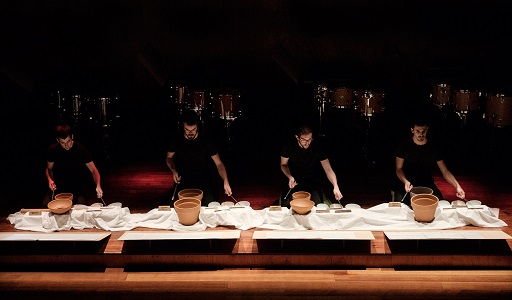 Frames Percussion, a percussion ensemble dedicated to the creation of new repertoire, represents the talent and commitment to the music of its time. Composed by a new generation of Spanish percussionists, the group is intended to meet the most demanding programs, with careful preparation and the greatest respect to the new composition languages. The impact of its presentation in 2014, with the interpretation of an ambitious concert about North American post-minimalism, has led the ensemble to carry out an incessant activity around this repertoire until the current season. Supported in the beginning by Joventuts Musicals de Catalunya and ESMuC, it has been programmed in cycles like Sampler Sèries and Escenes from the Barcelona’s L’Auditori, OUT.SIDE cycle, Mixtur Festival or ENSEMS Festival of Contemporary Music in Valencia. Among their most ambitious and demanding programs, stands out the Spanish premiere of Michael Gordon’s Timber, Le Noir de l'Etoile by Gerard Grisey and the spanish premier and recording of the monumental The so-called laws of nature by David Lang with Neu Records.