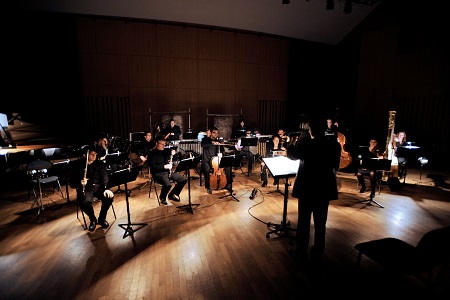 for oboe, bassoon, trumpet and trombone.

for flute, clarinet and oboe.

2e2m is one of the oldest and most distinguished French ensembles dedicated to today's musical creation. Its name that means "studies and expressions of musical modes" ("études et expressions des modes musicaux") has become an acronym, a guarantee of pluralism and open-mindedness. It is needless to say that for more than forty years the Ensemble has been aware of all musical practices. The Ensemble has premiered more than six hundred pieces. Before any other ensemble, 2e2m introduces composers to the public, and many pieces of its repertoire become major milestones. 2e2m has been given the label CERNI (Companies and ensembles with national and international influence) by French Ministry of Culture. The outstanding performances of the Ensemble are acknowledged domestically and overseas. 2e2m not only tackles a whole range of styles – classical, modern and recent – but is also a main player of new mixed art forms.