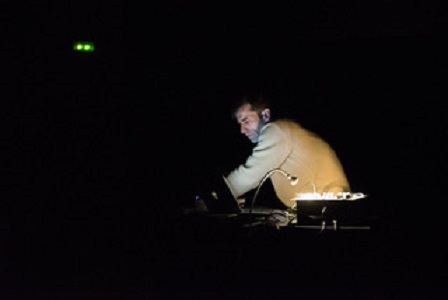 Adrià Bofarull is an artist who focuses his work on improvisation with electroacoustic devices. Usually involve his creations in concepts such as perception, philosophy, psychology and anthropological paradoxes. Despite the predominance of samples and manipulated field recordings, in their sound spectrum also fit the processes of synthesis and manipulation in real-time objects and instruments. He uses both hardware and different software tools to configure sets he plays intuitively. Always feeling the limits of their own sound he has published under his name or the pseudonym Hydra on labels such as Exp_net, Audiotalaia, Espais, Hazard, Tecnonucleo, RIR, thrmnphone, Plus Timbre... During the 2012 he was a resident artist at Gràcia Territori Sonor. He kept the duo Cràter next to the late Joan Saura, editing a self-titled album in 2013.   He had previously edited 7 albums with the name Dargelos where he wove abrupt compositions with a sampler. He has played in festivals and events like Off Herzios (Valencia), Lem (Barcelona), Experimenta Club (Madrid), Sonar (Barcelona). In 2016 play at Fonoteca Múrcia in a cycle commissioned by Francisco López. In 2017 he had published "the brain test", "a maelstrom walk" a conceptual album on labyrinth idea with J.Hernando and "speculative rites" in the Greek label Plus Timbre.